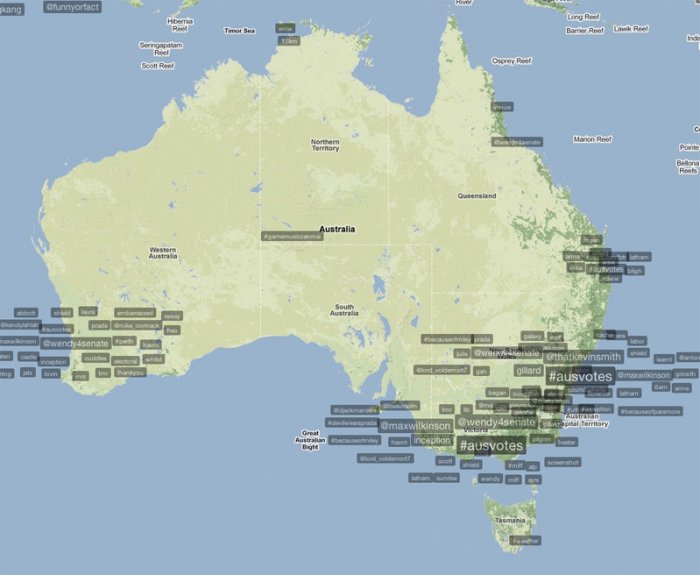 I've been looking at a few different tools for mapping social media presence in the real world. I suspect this could be a useful tool for business, but perhaps not quite yet: while local trends were rolled out in early 2010, there's a lack of location-aware applications that utilise maps and twitter trends that have any other purpose for general use.

Looking at Trendsmap today, I noticed something glaringly out of place in Australia.

Check out the large map at the top of the article. It's quite clear that not only are Sydney and Melbourne more active on twitter than Queensland but they use hashtags more frequently.

There's no hard data on this, but it's a topic that I've been discussing on the forums at Flying Solo and the Small Business Forum. I believe that Australia's use of social media is at a lower level of maturity than areas with higher population densities and therefore a longer exposure to online trends. We're still uncoordinated in our use of social media, using it primarily to connect with people we already know.

In areas of greater exposure to social media, there is the tendency to extend the social network beyond that of known family and friends, an involvement with the local community as a whole.

Social media can be an agent of community development and communication. It has the potential to be a major force in the lives of small communities.

We've just got a little more growing to do before this thinking becomes part of our mindset.