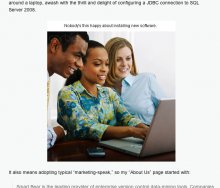 Finding imagery for your site is hard, whether it's part of the design or for an ongoing blog.

If there's one thing I loathe, it's shiny-happy people images that say nothing except "I don't care enough to find evocative pictures".

An epidemic of bland, faceless marketing that toes the corporate line but fails entirely to engage the humans who are forced to deal with the drivel. It's the visual equivalent of this kind of sentence:

GenericMarketingCo is a leading performance-based marketing company with enabling technology that connects marketers to consumers through a comprehensive set of email marketing and online media services.

I get it. It's hard to write good copy and it's hard to find good images.

But when you do find the perfect image, for the sake of your business, don't steal it.

(Note the watermark in the article image above. Click to enlarge. Not a good look!)

In the past, stock imagery was outrageously expensive. Resources like Getty Images could (and still do) run you into the thousands of dollars for an image that could only be used in explicitly defined circumstances.

Then came iStockPhoto, which was swiftly followed by a plethora of similar sites. These sites differed from traditional providers in that they crowd-sourced their images and charged massively less for their content. Instead of thousands of dollars, stock images could be obtained for just a few dollars. Although the images weren't of the incredibly high standard that is typical of Getty, there were quality images to be found.

Anyone could then cheaply source images for their site, brochures or magazine at a fraction of the cost of the old guard of premium providers.

Rights managed images are available on premium sites, such as Getty Images. This type of license is very specific about how the image can be used. Typical restrictions include:

Any use outside the strictly defined terms is not allowed.

Free doesn't mean free. The key word here is 'Royalty'. Royalties are what keeps artists in beer and skittles. I have a friend who wrote the theme tune to a popular Australian current affairs program. Every time that theme is played, in advertising, as the lead-in to the show, as the lead-in to a story as the lead-out before an ad or any of the many times its played, my friend gets a pre-defined payment. It's provided him with a very comfortable living over the last decade or so.

Royalties are paid to rightsholders (not necessarily the artist!) on a pre-set schedule for the lifetime of use of a creative work. It can be defined as yearly, each use, or any other schedule that sees regular payments made.

So the "free" in "Royalty Free" doesn't mean the image costs nothing, it simply means that once paid for you will have license to use that image in perpetuity.

Sites like sxc.hu and Flickr Creative Commons provide honest-to-god free images. You don't have to pay a cent.

But that doesn't mean there are no restrictions on image use. Each site or author will have different license terms which still must be abided by. For example, sxc have their own usage rights document, which effectively prevents you from using images for pornography or reselling the images. Some images also require notification or permission from the original authors for your specific use.

Flickr Creative Commons allows you to find free images that are available for use on the popular photosharing site, based on the Creative Commons license, which has a number of variations that allow authors to specify how images can be used and what attribution is required.

How can I tell what license an image uses?

Fortunately, each stock image site makes it pretty clear what the licensing terms are for images. It's important to note that in all cases you don't actually own the images. You just have a license to use them in a certain way.

If it has a watermark, it's either Rights Managed, Royalty free or has a license which requires some form of payment.

If it doesn't, you can probably use it free of charge, but pay attention to the usage rights.

So go forth and spruce up your blogs with awesome images - those images are out there, ready to be used (and attributed!) and require nothing more than a little time for you to find.

There's no need to steal stock images (or be embarrassed when you're called out on it!) when there so much good photography out there waiting to be used creatively!

Image credit: Charlotte Morrall. On Flickr and on charlottemorrall.com.

What a great shot! Well worth crediting, don't you think?