We've all had the experience of dealing with unreasonable people. It's not just designers who have 'clients from hell', but it's designers who've built an homage to client horror stories with clientsfromhell.com.

I'll be the first to admit - I had more than one sympathetic laugh as I clicked through the backstories.

At the same time, I grew more and more uncomfortable with what I was reading. Not that I think the site's inappropriate in any way, we all need a place to vent and a sympathetic ear to commiserate. I'm certainly not engaging in some PC tsk tsking about the poor treatment of clients at the hands of merciless designers.

Instead, as I read through the site, I came to realise that for many of the authors their war stories represented their own failures as businesspeople rather than that of their clients.

A Day In The Life 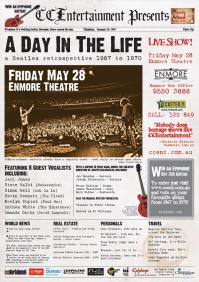 Our final work in the Classic Rock Concert poster series, 'A Day In The Life' was both a departure from the style we'd established while staying true to the intention of the series.

CCE wanted something a little different from this poster. The 'A Day In The Life' album has several references to newspaper stories and is at least partly inspired by the death of a friend of Lennon's, reported in the Daily Mail.

We were commissioned to produce a 60's era newspaper poster.

After researching various examples of British newspapers from various eras, we realised that until recently, newspapers were a mess!

Wild varieties of fonts, dramatic changes in line heights and little care given to kerning or structure. Furthermore, until the late 70's it was rare for images to dominate the front page.

Needing to give the feel of a 60's paper, while providing real structure meant creating a composite of styles, blending modern design structure with a messy, natural style of typography.

We included easter eggs in the form of 'stories' taken from Beatles lyrics and placed the entire design on a newly created aged paper (complete with coffee stains!). 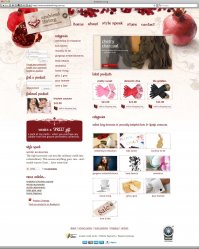 Ambient Living is the brainchild of Tish Pagano, a boutique online giftware store that caters to those who love fine things.

Unlike many other online stores, Ambient Living's products are hand-picked by Tish and carefully chosen for their aesthetic properties. It's an approach rarely seen in the pack-em and stack-em world of ecommerce and as a result the product range is unique, compelling and uniformly beautiful.

As such, it was extremely important for us to craft an image that fit the sensibilities of the site's potential visitors.

thinksync definitely oozes with passion for what they do, which is evident in every piece of work they produce. Their ability to create and design a concept from my ideas is outstanding. They genuinely listened to me and were quick to respond in great detail. thinksync proved to be extremely professional, reliable and fantastic solution providers. I would certainly recommend their services to others wanting a team who goes beyond the call of duty for website development. Tish - Ambient Living

Published in Web design
Tagged under
Be the first to comment!
Read more...
Page 6 of 6